First in Rich contents for the Millennial

The House of Reps Committee for the Niger Delta Development Commission ordered the Minister of Niger Delta Affairs, Godswill Akpabio and the acting MD, Interim Management Committee, Prof. Kemebradikumo Daniel Pondei to appear for the alleged illegal expenditure and mismanagement by the commission on Monday, July 20.

The announcement was made on Friday, by the Chairman of the committee, Olubunmi Tunji-Ojo, after the Ex-Managing Director of the commission, Joy Nunieh, appeared and testified before the committee at the National Assembly in Abuja. She reportedly made fresh allegations against the minister, accusing him of contract crimes at the NDDC.

Before Akpabio testified, however, the acting Managing Director of the Interim Management Committee (IMC) of the NDDC Prof. Kemebradikumo Daniel Pondei mounted the stage to give his testimony over the alleged extrabudgetary expenditure.

The Guardian reported that the proceeding commenced at 11.30 a.m. At the onset, Pondei looked unruffled as he presented his case. He disclosed that contrary to notions that he oversaw the expenditure of the sum of N51.1billion from February to date, he explained that N38.6bn was spent on capital expenditure, while the sum of N20.5bn was expended on recurrent expenditure during the period.

He referred to newspaper publications which captured how the money was utilised and cited payments on the training of the NDDC personnel, hotel accommodation in both Port Harcourt and Abuja, and arrears of monies owed contractors.

The drama started when the house queried him on the expenses he made without the approval of the National Assembly, discrepancies revolving around the payment of students scholarship, the NDDC headquarters building and the COVID-19 palliative expenses. He admitted approving payment for the headquarters but denied ordering payment for the Lassa fever treatment. The probe went on, to the tune of billions, and when asked to show evidence, the acting MD wasn’t forthcoming.

He was asked how much he had received since assuming office at the helm of affairs of the NDDC, disclosing that he got N72bn, adding the N2.4bn approved by the Federal Executive Council (FEC), the sum of N350m was approved for forensic audit before the 31st of the last year 2019.

He was further asked to explain the payment of the sum of N336m to Save Life Campaign in the Niger Delta.

That was the cue for Pondei to faint. Pandemonium erupted as officials promptly attended to him, fanning him and removing his shoes.

This viral picture of him being ‘revived’ has triggered several discussions on social media.

The lawmakers were forced to adjourn abruptly for 15 minutes to enable them to ascertain whether to go ahead with the hearing or not. The NDDC said the MD collapsed because he had been sick for two weeks.

In the report of the Senate ad hoc committee set up to unravel the alleged financial recklessness perpetrated by the IMC between October 1999 and May 2020, it was revealed that the Interim Management Committee of the Niger Delta Development Commission paid N570m to some staff members to undergo training programmes when Nigeria was on total lockdown following the outbreak of the COVID-19 pandemic.

According to a copy of the report obtained by Saturday Punch, N143m was paid to individual members of staff on April 1, 2020, to attend a participatory budget conference. The payment was made to five members of staff averaging almost N28m per person,”. Also in the report, N171m was paid in cash to 300 drivers on February 3, 2020, to attend a driver training course, scheduled to take place when the nation was on lockdown.

Nairametrics reported a breakdown of the refund which the senate wants to be refunded: Overseas Travel to the United Kingdom N85.7million, Scholarship grants N105.5 million, Union Members’ trip to Italy N164.2 million.

The other refunds which the senate wants to be made to the NDDC’s Account by the IMC are: payment made for Lassa Fever Kit N1.96 billion, payment for Public Communication valued at N1.12 billion, and COVID-19 fund expenditure N1.49 billion.

During his presentation, the minister accused members of the National Assembly of having 50 per cent of contracts awarded by the NDDC. When he was urged to name the beneficiaries, the minister said such contracts were usually given piecemeal to fall within the NDDC threshold and he could not lay his hands on specific facts at the hearing.

Link: video showing the exact moment Senator Akpabio was asked to turn off his mic:

Following the statement, the speaker of the House of Representatives Hon. Femi Gbajabiamila on Tuesday ordered the Minister of Niger Delta, Senator Godswill Akpabio, to publish details of members of the House, who collected contracts at the NDDC

He justified the decision to relieve ex MD, Joy Nunieh of her appointment as acting MD IMC, saying it was due to insubordination and the discovery that she falsified her NYSC certificate.

Following the collapse of the NDDC boss, creative Nigerians have made parodies of the scenario.

There has also been a list of governement officials who fainted by a twitter user: @chieze_1, tagged the Hall of Faint 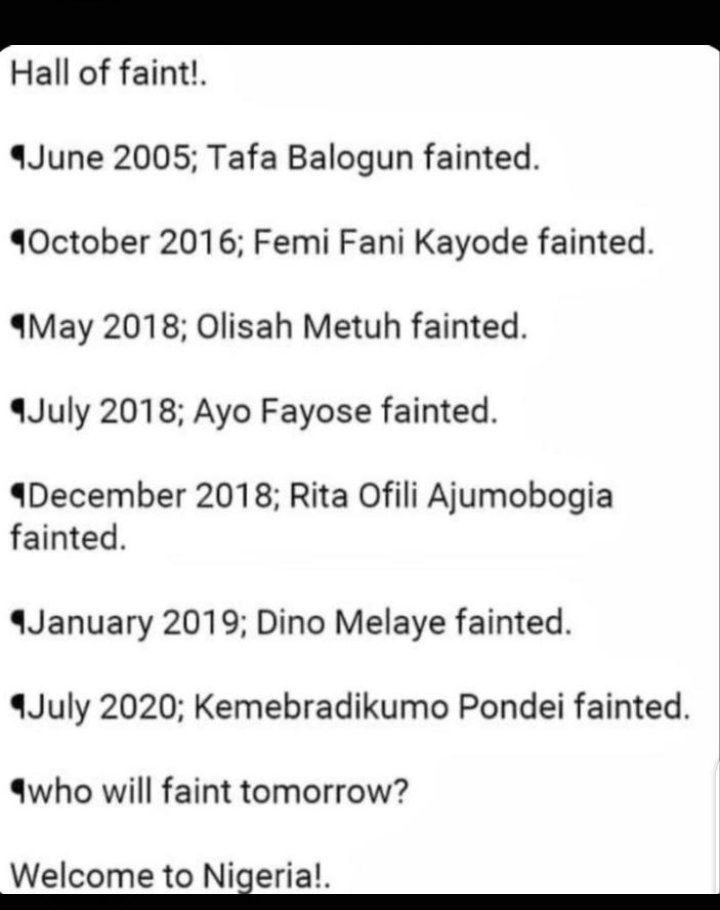 A former governor of Ekiti state, advised the president to sack Akpabio and Pondei, via his twitter handle.

The National chairman of the PDP, Prince Uche Secondus, in a press conference on Friday 24th July accused the president of abandoning his 2015 and 2019 campaign promise to fight corruption, and asked him to resign, citing the corruption on the federal agencies of NDDc and EFCC.

Nigerians are watching, some to create parodic videos, some for discussion topics, and others, like me, to report.